Posted on November 7, 2014 by englishtouringopera 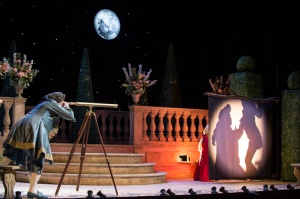 Having been to watch the opera Life on the Moon, I can say with certainty that it is a hugely enjoyable experience for one and all.

The set was fantastic: the complexity of Buonofede’s garden in Act 1 provided an excellent contrast with the simplicity of the supposed moon in the second act. I believe that this juxtaposition added to the comedic effect of the opera, as it is somewhat ironic that Buonofede was enthused by the concept of leaving his beautiful stately home to visit the plain and barren land of the moon.

From an analytical point of view, I was able to see that beneath the mask of comedy, the writer perhaps intended to make a statement about feminism, as the other characters are able to trick Buonofede – a sexist man – and make a mockery of his ridiculous view of women as sexual objects and property of men. The plot itself gave the audience a cathartic experience, as we watched their prank become successful, leaving Buonofede to be the sad, old man that he is.

The quality of singing was exquisite throughout – I believe that the operatic format of this piece added to the comedy, and had it been an ordinary play, it may not have been quite so hilarious.

I would definitely recommend this production to others; everyone over the age of twelve would be sure to find it both interesting and humorous. My only criticism is that some members of the audience struggled to follow the story due to the speed of some of the singing; however, this issue could be easily resolved had the subtitles been shown on the screens. Overall, I was very pleased – a delightful evening indeed.

Karis – Y11 student, Framwellgate School, Durham
———-
Karis attended our production of Haydn’s Life on the Moon as part of Stepping onto the Moon, a series of free workshops aimed at secondary school students, exploring the world of opera and how it is produced. For more information visit ETO’s website.

English Touring Opera is the leading touring opera company in the UK. ETO travels to more regions and to more venues than any other English opera company, touring annually to around 55 venues and presenting as many as 110 performances per year. Our aim is to offer opera to everyone, with a varied repertoire of high-quality professional productions featuring some of the finest talent in opera. View all posts by englishtouringopera