Posted on September 6, 2013 by englishtouringopera

This autumn, English Touring Opera perform a programme of music written by Vivaldi for the Ospedale della Pietà orphanage in Venice. Vivaldi spent most of his life working at this orphanage, which was a place where illegitimate children of local aristocrats were sent. Amongst the distinguished guests invited to performances was Jean-Jacques Rousseau who described the extraordinary power of the music:

I have not an idea of anything so voluptuous and affecting as this music; the richness of the art, the exquisite taste of the vocal part, the excellence of the voices, the justness of the execution, everything in these delightful concerts concurs to produce an impression which certainly is not the mode, but from which I am of opinion no heart is secure. 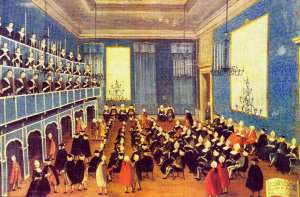 A kind of music far superior, in my opinion, to that of operas, and which in all Italy has not its equal, nor perhaps in the whole world, is that of the ‘scuole’. The ‘scuole’ are houses of charity, established for the education of young girls without fortune, to whom the republic afterwards gives a portion either in marriage or for the cloister.

Amongst talents cultivated in these young girls, music is in the first rank. Every Sunday at the church of each of the four ‘scuole’, during vespers, motettos or anthems with full choruses, accompanied by a great orchestra, and composed and directed by the best masters in Italy, are sung in the galleries by girls only; not one of whom is more than twenty years of age. I have not an idea of anything so voluptuous and affecting as this music; the richness of the art, the exquisite taste of the vocal part, the excellence of the voices, the justness of the execution, everything in these delightful concerts concurs to produce an impression which certainly is not the mode, but from which I am of opinion no heart is secure. Carrio and I never failed being present at these vespers of the ‘Mendicanti’, and we were not alone. The church was always full of the lovers of the art, and even the actors of the opera came there to form their tastes after these excellent models.

What vexed me was the iron grate, which suffered nothing to escape but sounds, and concealed from me the angels of which they were worthy. I talked of nothing else. One day I spoke of it at Le Blond’s; “If you are so desirous,” said he, “to see those little girls, it will be an easy matter to satisfy your wishes. I am one of the administrators of the house, I will give you a collation [light meal] with them.” I did not let him rest until he had fulfilled his promise.

In entering the saloon, which contained these beauties I so much sighed to see, I felt a trembling of love which I had never before experienced. M. le Blond presented to me one after the other, these celebrated female singers, of whom the names and voices were all with which I was acquainted. Come, Sophia, — she was horrid. Come, Cattina, — she had but one eye. Come, Bettina, — the small-pox had entirely disfigured her. Scarcely one of them was without some striking defect.  Le Blond laughed at my surprise; however, two or three of them appeared tolerable; these never sung but in the choruses; I was almost in despair.

During the collation we endeavoured to excite them, and they soon became enlivened; ugliness does not exclude the graces, and I found they possessed them. I said to myself, they cannot sing in this manner without intelligence and sensibility, they must have both; in fine, my manner of seeing them changed to such a degree that I left the house almost in love with each of these ugly faces. I had scarcely courage enough to return to vespers. But after having seen the girls, the danger was lessened. I still found their singing delightful; and their voices so much embellished their persons that, in spite of my eyes, I obstinately continued to think them beautiful.

English Touring Opera is the leading touring opera company in the UK. ETO travels to more regions and to more venues than any other English opera company, touring annually to around 55 venues and presenting as many as 110 performances per year. Our aim is to offer opera to everyone, with a varied repertoire of high-quality professional productions featuring some of the finest talent in opera. View all posts by englishtouringopera